Man, this book has me hooked! The Bone Collector 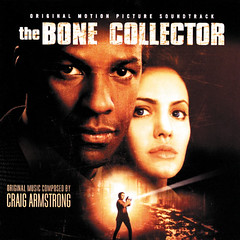 by Jeffery Deaver is as captivating as it is intriguing. Lincoln Rhyme is a moody quadriplegic who is stuck in a bed with the entire use of his mind but only the use of his left ringer.The lack of forensic stimulation and crime scene exposure has left him sarcastic and pigheaded. A detective Rhyme use to work with, Sellitto, drops by and asks for his help on a case, leaving the crime scene report behind, which is bait that his mind has already taken. To see how his mind thinks and works helps the reader become more involved with the story, following along with Lincoln Rhyme’s logic.

There is a movie adaptation of the book titled the same. I watched the movie before I started reading the book, which is a rare occurrence, but sort of generalized what I could’ve expected in the book. My mom, who had already read and seen The Bone Collector, in that order, warned me that the portrayal of the relationships between the characters were altered in a way that didn’t truly capture how they were in the book. Currently I have read a only 17% of The Bone Collector, and so far she has been right. It is rare that I encounter a book the first in its series that is over 450 pages long, this being 516. As intriguing as this is I should be finished in no time, no matter the length!

Here’s a to an excerpt of The Bone Collector and a link to the series order.

“Armstrong The Bone Collector – Original” (CC BY 2.0) by  iClassicalCom

Seven years ago Dogs: Bullets & Carnage was released by Viz Media for North America. Volume 0 had a huge impact on me in the sense that I had never before read an Explicit Content manga before nor one with this concept, as well as reading something in the Biopunk genre, one I am not familiar with. The story follows four people who are barely surviving in an urban dystopian environment filled with guns and swords. Each one of them is driven by their past, narrowly surviving the present if only by their balls and dumb luck.

One of the main reasons I started reading this manga is because I had stumbled upon the anime, Dogs: Stray Dogs Howling in the Dark. It only had four episodes, each running 16 minutes each, but watching those episodes intrigued me. It showcased how violent and crazy the manga could get as well as the four individuals, a snippet of their story lines, and a tiny glimpse at how each of them connects.

A lot of the manga that I have read is accompanied by a few anime episodes, which is how I got drawn to them in the first place. I usually don’t watch and read if both are long and well developed, for example One Piece. It is still ongoing and currently has 82 volumes and 750 episodes. I really like One Piece, but the time commitment you’d have to make in order to further understand and love it is too steep for me.

So far, I have read up to volume five and am eager to read on. If you’re into insane and spontaneous action that involves swords, guns, and seldom but unavoidable tender heart-felt moments, this a story for you.

One thought on “Thursday Thoughts”

Growing and suppling melbourne with organic fruit and vegetables

Author of A Journal for Damned Lovers & X and I: A Novel

a little lunch, a little wine, a LOT of talking!

A geeky blog of randomness!

A dose of fetish. Good friends. An incomparable muse.

Girl With A Tripod

Diary of a Wanderer

Be careful, or you might land up in my book.

One Lesson At A Time

I have people to kill, lives to ruin, plagues to bring, and worlds to destroy. I am not the Angel of Death. I'm a fiction writer.

David Snape Show - Bourne and Beyond
Recipe in a Bottle

Connecting to Friends, Old and New, Through Recipes, Gardens, and Dinner Parties

The bloggings of Jez Farmer - the lunatic, the lover and the poet.

Reports from my somewhat unusual life

A blog full of humorous and poignant observations.

THE CREATIVE PALACE FOR ARTISTS AND AUTHOR RESOURCES

Welcome to the world of cats!

The Art and Craft of Blogging

A daily selection of the best content published on WordPress, collected for you by humans who love to read.

The latest news on WordPress.com and the WordPress community.